For her daughter's birthday, Denise Deegan decided to sign them both up to learn Krav Maga, a self-defence system that is used by military all over the world. The pair came away from their training stronger, tougher and better prepared 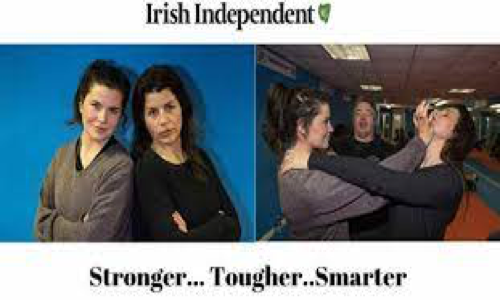 Brought to Ireland by Patrick Cumiskey

I had been trying desperately to think of a gift for my daughter Aimee. Knowing her as I do, it had to be a surprise. It had to be different. And it had to be something that she'd never think of herself. I was floundering. Until a friend told me about a course she had just completed called Krav Maga.

Krav Maga is a self-defence system used by military units all over the world, brought to Ireland in 2003 by Irish instructor, Patrick Cumiskey. I thought that the weekend course (full day Saturday and Sunday) would be a fun way to spend time together. It would certainly be different. It would appeal to the person who had once made an off-the-cuff remark that she'd love to have joined the army. Most importantly, she'd never see it coming. The last reason I actually signed us up for a course with Krav Maga Ireland was for self-defence.

Aimee was definitely surprised, pleasantly so. Unlike her mother, she had heard of Krav Maga and was keen to give it a go. We converted the voucher into the first available weekend course.

That weekend came around quicker than expected. Unfortunately, the day didn't get off to a good start. We were late and consequently stressed out when we arrived. The chief instructor, Patrick Cumiskey, and one of the few people he has authorised to teach, Marie Poole, broke the tension by making us laugh. We soon forgot about our crabby moods and then it was straight to it.

My first surprise was the number of men in the class. The ratio was 8:5 men to women. I later learned that people had travelled from Holland, the UK, Navan and Leixlip specifically for this course. Many had heard about it from friends who had done it. There was one other parent-child pairing, a father and daughter who had travelled from abroad on a recommendation.

Before we got physical, Patrick, a qualified psychotherapist who teaches mental toughness, worked on our thinking. Krav Maga, he told us, is about "protective offence" not "defence". Defence implies victimhood. Protective offence, on the other hand, is all about finding your inner strength and counter attacking. The moment someone chooses you as a victim, you, nice person that you are, must become an attacker. That is the attitude you must have from the start. Because it puts you in a position of power. Krav Maga means close combat and it is employed by armies and police all over the world. Patrick, himself, trains military units.

One thing I loved about the course was the psychological aspect. We learned the psychology of attackers, how they choose their prey, how they get close, and how they might be discouraged to select an individual. We learned how to anticipate danger, such as a person invading our body space, and how to adopt a stance that would allow us to be ready - feet apart, one in front of the other, knees and elbows bent, hands level with the chest, palms out.

Everyone Should Know this skills..everyone

We also learned (to my initial shock) that in certain situations we should strike first. It should be said that the main objective is to get away. Stun your attacker, give him hell, but go at the first opportunity. There was so much wisdom here that I wanted to bring it straight home to my son. Everyone should know these skills. Everyone.

We were paired up and shown moves, how we should react to various scenarios, for example, someone grabbing you from behind, someone putting you in an armlock, choking, etc. Speed, surprise, noise, aggression and sometimes even a little craziness are key.

So too is mercilessness, something I struggled with.

But then I was reminded that the attacker has no remorse, doesn't care about you or who you are. You are just serving a purpose. If you have trouble with the concept of hurting them, then you remind yourself that you are not just fighting for yourself, you are fighting for the people you care about, the people you look after, the people who need you to stay you, in one happy piece.

Attackers deliberately target nice people, often drawing them closer by asking for help - think Ted Bundy. With Krav Maga you must lose your nice for however long it takes to get away. It will be there waiting for you when you do.

My partner on the Saturday was a gorgeous, tiny woman. By the end of the day, she had turned into a monster. Krav Maga had unleashed a beast. I loved that, it inspired me. Together, we tried out move after move. We practised and roared and pounded, one attacking, one defending. And always helping each other along, pointing out things that the other person might have forgotten to do. It was good to learn that my "angry" face is terrifying.

Then, because this was Irish Krav Maga, we had to mix up all the moves we had learned and employ back-up moves should the first ones fail. This is where, at the end of day one, my brain went into meltdown. I froze completely as all the moves jumbled together in my head.

Target any Vulnerable Area you can Hit

Luckily, there was day two. We went over the previous day's moves and were reassured that there is no one step-by-step approach. You use whatever part of your body is free to attack and you target any vulnerable area you can hit - and there are many. We learned more moves. And we learned never to expect help from passers-by.

In addition to the psychology and the techniques there was so much common sense advice, things that I would have never considered and I will be passing onto my son.

For example, if someone is aggressive to you in a pub and dares you to "step outside", you do not step outside because, in doing so, you are agreeing to a fight. And you have no legal comeback to say that you were attacked.

My thinking has definitely changed as a result of this course. I am more aware of at-risk situations and more alert generally. Instead of giving people the benefit of the doubt in situations where I feel uneasy, I will either leave or be ready. And I know that when I have to become aggressive, I will step up.

Aimee, from the start, had no problem with aggression. What she loved was learning the techniques to stun, overpower and get free as well as all the psychology and logic.

We went for fun, to spend time together and to do something different. But we got so much more. We learned how to be stronger, tougher, smarter and better prepared. Like the Pink Panther's Kato, we are going to spring on each other every so often at home to keep everything fresh in our minds. And have fun!